In the last article we have made progress by using a more modern syntax.

All of this is fine and dandy, but it’s also very 2016. Functional programming is a coding paradigm that’s considered safer and more modern.

Why we should rethink our code? Because of two things related to the same thing.

Take a look at the for loop. It serves for multiple purposes:
It is used to make our array grow by iterating.
Its iterator (variable i) is used for checking FizzBuzz conditions.

Let’s look at the general problem from a different perspective. We’ll describe it this way:

Let’s do just that.

I have created a local helper variable “curVal”, since our index doesn’t correspond to the current array value anymore.

Another thing should bug anyone who’s into functional programming are the two loops. While perfectly fine they can be replaced by more modern methods of iterating arrays.

So let’s fix “getNumericArray” by using the following technique:

Notice how we’ve transformed an array using the dot notation, since all three lines produce arrays.

But there’s no need to. It’s just more code and overhead. Sure enough this was the first thing in JS I personally found odd and unintuitive. But like many other things I have grown accustomed to it and now feel much more comfortable with.

Now it’s time to transform our main function from a loop to a map.

I had to change result from const to let because it is reassigned. But hold on! We just learned that we can use the dot notation to mutate an array without re-assigning. So let’s do that.

And since zero stands for a boolean false, we can shorten this even further like so:

And in case you were wondering, yet we could have folded the entire algorithm into a single line:

But hey, wasn’t the original task about outputting strings and not arrays?

Take a look at the original solution vs this one and see what a distance we’ve covered. That only goes to show that you should never get stuck with only a single notion on how to deal with a coding challenge (or other real life challenges for the matter). 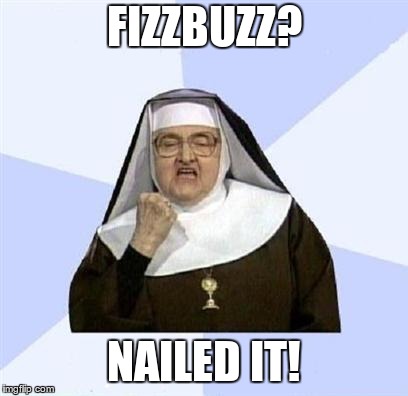 And here’s a challenge for you. Can you come up with a solution to a completely generic FizzBuzz-like challenge? i.e.:

Hope you had a great time resting on your laurels. Wake up, it's not 2015 anymore, Toto! Time to modernize.

So you've written an "algorithm" that's too specific and hardly does anything, huh? Time to tidy up!